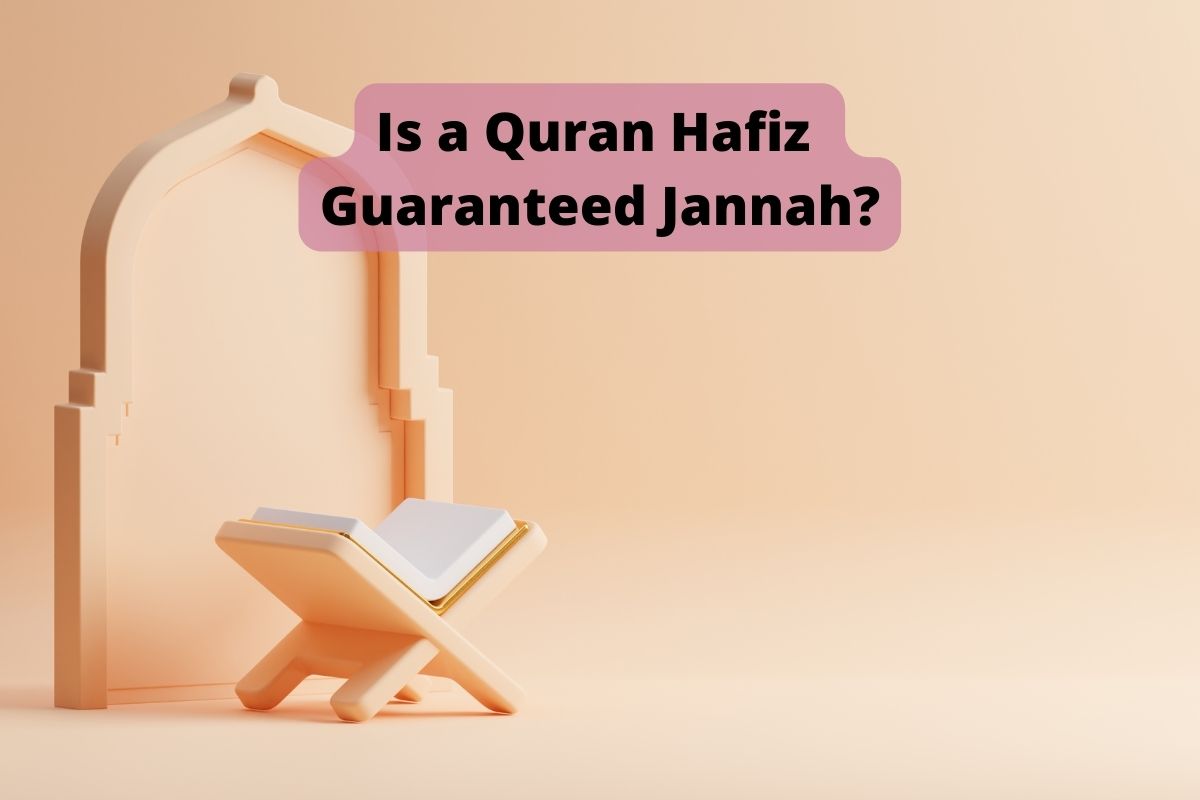 Becoming a hafiz is something most Muslims look up to, but why? Is it because a hafiz guaranteed Jannah? Are there any benefits of becoming a hafiz? Let’s find out.

Is a hafiz guaranteed Jannah? No hafiz is not guaranteed Jannah, a Muslim is will not go to heaven just because he memorized the Holy Quran, if the person is not applying what he learned from the Quran and the prophet in his life then what is the purpose of memorizing the Quran?

If your only reason for wanting to become a Hafiz was your belief that a Hafiz is guaranteed Jannah, I’m sorry for breaking the bad news, but the good news is that there are actually a lot of very good reasons and benefits to becoming a Hafiz

No becoming a hafiz is not obligatory. The prophet once said about memorizing Quran:

Regarding the rewards of becoming a hafiz the prophet peace and blessing be upon him said:

Quran and fasting will be a witness on us on the judgment day, as the prophet peace and blessing be upon him said:

What is special about a Hafiz?

There are many reasons to encourage you to become a hafiz, and we will mention some of them:

Understand the purpose of life and Allah’s creation:

When you read and memorize the Quran you will understand why Allah created us and everything around us.

Memorizing the Quran will sharpen your memory, and help you memorize and recover the information faster.

Memorizing and reading Quran will guide you:

The Quran is not just about the past, the holy Quran is for all times and all the matters of life, it’s like a light that never fades.

Learn how to deal with life problems:

Allah said in the Quran:

“And we have certainly presented for the people in this Quran from every example that they might remember.” (Surah 29, verse 27).

What we understand from the verse is that Allah has shown many examples and stories in the Quran for us to learn from and guide us in our life problems.  When memorizing the Quran will guide you through your darkest moments.

Know what is right and what is wrong:

The holy Quran shows us what’s right from what’s wrong telling us what sin is and what is not. The Quran teaches us to have patience and always have faith in Allah and know that no matter what happens for you it’s for a good reason that only Allah knows.

Reading and memorizing Quran show us the wonders of Allah and that there is nothing impossible to him:

No matter how impossible your wish sounds Allah can always make it come true and solve all your problems.

Quran rewards us in the afterlife:

The prophet peace and blessing be upon him said:

“Read the Quran for it will come as an intercessor for its reciters on the Day of Judgment.”

Also, the prophet said that it saves a person from the hellfire, he said:

“If you place the Quran in the cuticle and then you throw it in the fire, it will not burn.”

Memorizing and reading Quran grants us many rewards, as the prophet said:

“Whoever recites a letter from the book of Lord, he will be credited with the good deed and a good deed gets a tenfold reward?”

If you are stuttering or find it hard to read the Quran Allah will reward you for trying:

Not being able to read all the words or understand it might be frustrating, but always keep in mind that you are doing this for Allah and you will be rewarded and with a little practice you will be good at it.

Fulfilling what we are instructed to do:

As Muslims, we were instructed to read the Quran every day and understand its verses and message to use Allah’s guidance in our daily lives.

Reciting Quran grants us many rewards:

The prophet peace and blessing be upon him said: “Verily the one who recites the Quran beautifully, smoothly and precisely he will be in the company of noble and obedient angels. And as for the one who recites with difficulty stumbling (or stammering) through its verses, then he will be rewarded twice.” (Sahih Al-Bukhari)

From this hadith, we can see that trying to read and memorize the Quran even though you’re struggling you will be rewarded.

Also, the prophet said about memorizing the Quran: “It will be asked to the companion of the QDunia Read and elevate (through the levels of Jannah) and beautify your voice as you were used to doing when you were in Dunia! Indeed, your position in the Jannah will be at the last verse you recite!” (Abu-Dawood)

Memorizing the Quran will put you in a higher place in heaven.

You will start to understand how good it feels to help the one in need, to be there for others when they need you the most.

You can read the Quran anytime and anywhere:

Sometimes you feel lost or sad and you want to read the Quran to calm you down and help you get relieved but you don’t have a Mushaf with you. When you memorize the Quran you won’t face this problem anymore.

IF a Hafiz is not guaranteed Jannah, Who is?

The prophet (peace and blessing be upon him) said: “Guarantee me six things and I guarantee you Jannāh. Whenever you speak say the truth. Fulfill your promises when you make them. When you are entrusted with something, carry that trust. Safeguard your private parts, lower your gaze and prevent your hands from harming others.” [Collected Ibn Khuzaymāh].

‘Abdul-Razzāq Ibn Abdul-Muhsin Al-‘Abbād explained the meaning of the hadith as follows:

“Guarantee me six things and I guarantee you Jannāh refers to six actions that are easy to do. These six deeds are among the doors of piety, which are simple and easy to perform. Whoever continues to practice these six things in his life until death is guaranteed Jannāh. This is a safe and sure path to Paradise.

“Whenever you speak say the truth.”

This trait applies to the honest Muslim. He isn’t known to be a liar. This straightforward Muslim continues to speak the truth until his truthfulness lands him in Jannāh. The Prophet ﷺ said:

“Fulfil your promises when you make them.”

Fulfilling promises is a characteristic of the believer and a sign among the many signs of Taqwā. The Muttaqeen aren’t known to break their promises or breach their contracts, oaths or pledges. Completing a promise, oath or pledge is the foundation in building a Muslim society.

Included in this action are all trade, business and mutual relations. Each and every one of these dealings is related to the community. Furthermore these transactions and pledges stop at the fulfilment of a promise. Hence if the promise is broken then the trust is gone; and when that takes place, mutual relations deteriorate and respect diminishes.

“When you’re entrusted with something, carry out that trust.”

This is among the greatest traits of character which Allāh praises. The Most High praises the people who carry out something they are entrusted to do. When a person does this action it shows he has complete faith and good Islām. Carrying out trust preserves the Deen, honour, wealth, body, soul and knowledge etc. The Prophet ﷺ said:

“The believer is the one the people trust with their wealth and life.” Therefore, if trusts are carried out in the community, the unity is strengthened and brotherhood grows stronger. And once these things occur goodness and blessings prevail and spread.

This means you prevent them from doing Harām or falling into illicit deeds. Safeguarding the private parts preserves and protects the offspring, lineage, cleans the society, and is a security against the spread of evil and disease.

This means you don’t look at prohibited things. Lowering the gaze has many benefits; It gives a person the light and sweetness of faith. Furthermore, lowering the gaze strengthens the heart, purifies the soul, and sets it straight. Through lowering the glance a person is given protection against looking at Harām things and falling into sin.

“Prevent your hands from harming others.”

This means you prevent your hands from harming people, transgressing against them, or placing something evil in their way. The person who harms Allāh’s slaves, Allāh and the people hate and detest him. What is more, the society and common folk reject the one who harms Allāh’s servants.

This is a sign of bad character and inferiority. On the contrary, whenever a person refrains his hands from harming others it shows that he is well behaved, has good manners, and interacts with others on piety. Allāh has prepared a great fortune for the one who doesn’t harm people with his hands.

How it is that person’s character and nobility isn’t enough until he moves something harmful out of the believers’ path! The Prophet (peace and blessing be upon him) said:

“A person while walking along the path saw the branches of a tree lying there. He said: By Allāh, I shall remove these from this road, so they may not harm the Muslims. And as a result of this action, he was admitted to Paradise. “[Collected Muslim]

What is considered a Hafiz?

Hafiz is the one that memorizes the whole Quran.

Seven generations of hafiz in paradise:

The Prophet (peace and blessing be upon him) said, “The best among you (Muslims) are those who learn the Qur’an and teach it.”

The Prophet (peace and blessing be upon him) said, “If anyone recites a letter from Allah’s Book he will be credited with a good deed, and a good deed gets a tenfold reward. I do not say that ‘Alif-Lam-Mim’ is one letter, but ‘Alif’ is a letter, ‘Lam’ is a letter. And ‘Mim’ is a letter.” [Sahih Al-Bukhari Hadith 6.459 Narrated by Aisha]

Also, The Prophet (peace and blessing be upon him) said, “Such a person as recites the Qur’an and masters it by heart, will be with the noble righteous scribes (in Paradise)! And such a person who exerts himself to learn the Qur’an by heart, and recites it with great difficulty, will have a double reward.” [by Mu’adh al-Juhani]

The Prophet (peace and blessing be upon him) said: If anyone recites the Qur’an and acts according to its contents, on the Day of Judgment his parents will be given to wear a crown whose light is better than the light of the sun in the dwellings of this world if it were among you. So what do you think of him who acts according to this?

As you can see there are many hadiths about reading and memorizing Quran but none of them say that seven generations of a hafiz will go to paradise.

The hadith that you’re talking about is a weak hadith, and there is no proof of it being correct.

What To Say Before Reading The Quran? 11 Duas to Memorize
Can You Read Quran without Hijab?